The bat is one of the most important pieces of equipment in baseball as it is the offensive power tool of the game. The best sluggers in the game are definitely serious about their bats as it is a crucial factor to batting success.

Hitters have different preferences and styles not only when it comes to hitting technique, but also their bats.

The barrel determines the flexibility or ‘flex’ of the bat. Some players prefer greater flexibility while others prefer a more rigid barrel so they can exert full force when striking the ball.

The barrel has a designated ‘sweet spot’ which is about 5 – 7 inches from the handle that helps determine how fast and far the ball will travel after contact. The sweet spot varies based on the bat’s material and design.

Types of Baseball Bats: How Are Bats Constructed?

Structure-wise, bats can be constructed using one or two pieces. 1-piece bats have the same material running from the barrel to the handle, which makes for a stronger and more rigid bat.

2-piece bats consist of a separate handle that is fused to the barrel, which provides greater ‘flex’ when the ball hits the barrel, with less vibration in the handle.

Bats differ based on various factors such as material, size and composition. Let’s take a look at the types of different bats you can choose from.

There are four main types of bats in baseball. These include the traditional wood bat, in addition to newer aluminum, composite and hybrid bats. Below is detailed information on each of the different types.

The 4 Different Types of Baseball Bats

There are 4 different types of baseball bats you ought be aware of. Each one has it’s own individual benefits…

The standard and classic bat used in major and minor baseball leagues around the world is made of wood. While bats made of other materials have been introduced over time, professional leagues continue to stand by using traditional wood bats.

Wood bats can be made out of different types of wood, namely maple, ash, birch, bamboo or composite. Out of these, bats made of bamboo are the strongest, with maple ranking second to it. Birch is also comparable to maple in terms of strength, but it is less dense than maple. Ash is a bit softer and hence more flexible than maple and less dense, being similar to birch with respect to weight.

This is why ash has traditionally been the wood of choice for baseball bats. Composite wood is made of a combination of wood and composite materials, which is not approved for use in many leagues. Historically, bats made of ash wood have been quite popular in professional leagues.

The company Louisville Slugger used to exclusively make bats from white ash wood for the MLB. However, most professional leagues have now switched over to maple as their wood of choice for bats as they are stiffer, which actually causes them to break more often. Power hitters especially often prefer maple wood bats as it allows them to apply as much force as they can when hitting the ball due to the rigidity and stiffness of the bat.

173 Reviews
Louisville Slugger 2020 Youth Genuine Maple...
For young players looking for a traditional wood bat, the Louisville Slugger 2020 Youth Genuine Baseball bat is a great choice. What’s great is that it comes in different sizes (27 – 30 inches in length) and in two different types of wood, ash and maple, that you can choose from.
$24.95
See Details
Different Types of Baseball Bats: Type #2

Aluminum bats are lighter and more durable compared to wood bats of the same size. As such, they are easier to swing, which is suitable for younger players learning to hit. Given this, aluminum is the most common material used for baseball bats in little league, high school and college baseball leagues.

Some alloy bats are made of a mix of aluminum and other metals to make it stronger. When the ball strikes an aluminum bat, the ball tends to pop off the bat at a higher speed, which is an exchange for the lower strength and accuracy that younger players have. 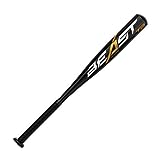 358 Reviews
EASTON Beast -10 (2 1/4") USA Youth / Kids...
Here is a link to a top-rated aluminum bat available on AmazonThis is the 2018-2019 EASTON Beast – 10 Tee Ball alloy bat which is ideal for young players that can find increased power with this bat. It is a 1-piece design with a 2-1/4” barrel and All-Sports grip, which makes it super comfortable and easy to hold. It is made of lightweight and durable ALX50 Aircraft Grade Alloy.
$36.95
See Details
Different Types of Baseball Bats: Type #3

Composite bats are even lighter than aluminium bats as they are composed of a mixture of graphite, plastic and occasionally titanium.

Despite this, composite bats are typically less durable than aluminum bats, particularly in the thin region between the barrel and the handle. 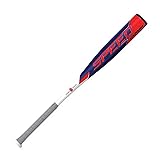 Hybrid bats are designed using different materials in different parts of the bat.

The handle and spine are typically made of aluminum, while the barrel is composed of composite materials such as graphite, plastic and titanium.

They combine the best aspects of both aluminum and composite bats. As such, hybrid bats are highly durable (like composite bats) but still somewhat expensive due to the composite materials used.

Their use is generally prohibited in most adult and professional leagues. 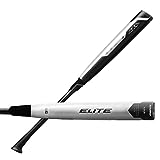 26 Reviews
Axe Bat 2019 Elite Hybrid (-3) BBCOR Baseball...
The AXE Bat is a unique bat on the market. It's got a patented fit to help with grip, super durability and designed to hit faster and farther
See Details
Types of Baseball Bats: Know Your Bats...

While there are several different types of bats out there, the MLB only allows for the use of wood bats.

Bats made of ash wood have historically and most popularly been used by MLB players, although maple has come to be favored by some players in the recent past because some feel it provides harder and more impactful strikes.

Bats made of birchwood and beechwood are also acceptable, with the latter having been recently approved by the MLB.

In addition, there are specific regulations with respect to the size of the bat. According to the Official Rules of Major League Baseball, section 1, 1.10. (a):

Compared to wood bats however, aluminum bats typically hit the farthest. This is because aluminum bats are easier to swing due to their lightweight aluminum construction, as well as a balance point (i.e. centre of mass) that is closer to the handle which allows for greater flexibility.

In addition, aluminum bats have a larger ‘sweet spot’, making it easier to hit the baseball.

Types of Baseball Bats: Bat Brands on The Market

There are a number of different brands of baseball brands in the market. Some MLB players have some specific preferences while others do not. Some of the most popular brands include Louisville Slugger, Easton, Marucci, Old Hickory, Sam Bat, Rawlings, Tucci, DiMARINI and Mizuno.

Below is a summary of some of these brands.

Louisville Slugger is the official bat brand of the MLB, with approximately 20% of all players using Louisville Sluggers currently. It has a long history, dating back over 130 years, and was founded on the discovery of quality wood from Louisville,

Kentucky over 200 years ago. Professional leagues use ‘MLB grade wood’ for their bats, which rates as the top 3% of Louisville Slugger’s woods. The wood provides an extremely hard and rigid hitting surface, producing the hardest hits. 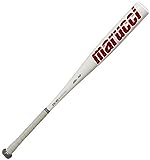 The Marucci Bat Company (of Marucci Sports) has quickly built a strong reputation in the bat industry. Its bats are amongst the most commonly used bats by MLB players, often competing with Louisville Slugger, with reports that it has even surpassed it for top spot, with 28% of all players using Marucci bats now.

Marucci’s bats are made with high grade maple from naturally grown trees in Pennsylvania. The bats are made extra hard through a ‘boning’ technique that involves compressing the wood to close its pores before sealing.

The company uses high grade wood and prides itself on crafting custom bats that are only made once an order is placed. An increasing number of MLB players have adopted Old Hickory bats for their play so you will likely see them out on the field more and more.

A well-constructed bat is critical to the game of baseball. There are several factors to consider when choosing a bat that is right for your style of game and hitting goals.

Hard, dense bats are heavier but provide a rigid hitting surface that allows for powerful strikes. These bats are typically made of wood. On the other hand, bats made of aluminum are lighter (making them ideal for younger players) and offer more flexibility and higher speeds.

The MLB only allows the use of wood bats, with ash and maple wood bats being the most popular. Whatever your bat choice may be, use it to fine-tune your skills to hit that ball out of the park!

Finally it’s also worth mentioning that if you’re buying a bat for your youth player, usually a bat bag is something that is not only recommended but needed to stay organized and ready for the season. You can check out more about Batpacks and other bat bags here.

What types of baseball bats have you used? Let us know!